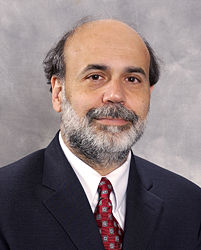 Over the last week the stock market had quite a pull back followed by a small rise at the end of the week.

This happened as a result of Bernanke, the federal reserve chairman, hinting that he is most likely not going to lower interest rates this year. He also suggested that an increase may be possible as he is concerned about inflation.

This usually spooks some people out of the market.

What typically happens when interest rates rise is the dollar becomes more valuable and therefore it’s harder for companies to finance their expansions profitably as they now pay more for loans.

On the consumer side, it’s harder for consumers to borrow to buy goods and services and make the monthly payments. Also it makes it more difficult for consumers with existing debt to make their existing payments which can lead to more foreclosures and bankrupties.

Another problem is the stronger our dollar gets the harder it is to sell American made products and services  as the exchange rate makes our goods and services more expensive… so when interest rates go up, the dollar goes up in value, exports go down and imports go up.

However, there are positives…

They profit by printing more money and loaning it to banks or the US Government. However, they cannot just print whatever they want because if they did, then eventually no one would want to use their currency globally. Many countries have begun to question the stability and safety of the US dollar valuation.  Therefore, they must settle for some moderate amount of inflation which provides them a good return, but still maintains its value in relation to competing currencies.