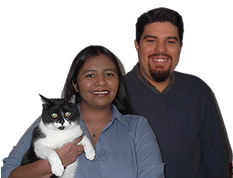 I live in Burlington, Vermont with my wife, Heavenly, and Noodle the cat, pictured to the right.

My first job was working summer vacations as a fruit picker and “pick-your-own” manager for Paul Mazza’s Fruit & Vegetable Stand of Essex Center. Then, when I turned 16 I took on a second job that summer as a cashier and stocker for Grand Union of Essex Junction. When summer was over I kept working at Grand Union while going to high school. The following summer I continued working at Grand Union, full time.

Once I graduated from Colchester High School I went to the University of North Texas in Denton, Texas. I joined Josten’s as a ring inspector and eventually took on jobs running computer functions for the company while going to college.

In 1998, I decided to open up JLRyan.com while still working full-time at Josten’s and going to school full-time.

By 2000, JLRyan.com was keeping me busy enough to focus on the business full time while still going to school full time. From 2000 to 2004, I continued to grow sales and open up several other web sites including CosmicVitamins.com, PepsiCollectables.com, and ElectricGear.com.

In 2002, I graduated from University of North Texas (UNT) with a business administration degree in Marketing with an emphasis on e-commerce along with some courses in Entrepreneurship. Heavenly and I moved back to Vermont and got married on the shores of Lake Champlain at St. John’s Club. We then purchased a home off North Ave and Heavenly and I continued to run the several web sites.

In 2004, we took on web site management of Hamlens.com, which is the online presence of Hamlen’s Garden Center of Swanton, Vermont.

Later in 2004, I decided I really liked creating and developing web sites as a occupation, so I opened Advantage Creations to offer my help to other small businesses wanting to do business online. In the first year of business as Advantage Creations we created the several web sites for clients. We also formed ChamplainCoffee.com to offer low acid coffee online. As I love coffee and have acid reflux, this was a perfect business for me to get involved in.

In 2005, we have continued to manage the web sites created previously as well as completed several more new websites for clients.

In 2007, I was elected chair of the Vermont Libertarian Party and have remained in this position to date.

Along with running several retail web sites and a web development/internet marketing firm, I trade the stock market. I journal this on my website: Champton.com.