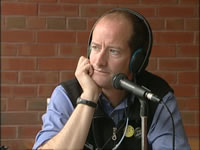 Following up from my last post, I will include a brief summary and background of some of the speakers from the Vermont Libertarian Convention.  The first speaker was Rob Williams of the Second Vermont Republic/ Vermont Commons.

The mission of Second Vermont Republic is to help Vermont peacefully secede from the United States. Below is short version of their Vermont Sovereignty Declaration:

Recent actions by the United States government including the prosecution of illegal wars, the Patriot Act, the illegal rendition of terrorist suspects, prisoner abuse and torture, citizen surveillance, the suppression of civil liberties, the suspension of habeas corpus, a foreign policy based on full spectrum dominance and imperial overstretch, and a culture of deceit have all given rise to legitimate concern that under circumstances of its own choosing, our government might not rule out:

(1) the suspension of the U.S. Constitution or Bill of Rights,
(2) the declaration of martial law,
(3) the militarization of civilian police functions,
(4) the suspension of free elections,
(5) the usurpation of individual property rights, or
(6) the negation of the Second Amendment right to bear arms.

In light of these troubling developments, the State of Vermont hereby reaffirms

(1) its rights of sovereignty,
(2) its right to nullify acts of the central government deemed to be unconstitutional,
(3) its right to secede from the Union, and
(4) its right to call a statewide Convention of the People to decide whether or not it remains in the Union.

Rob Williams, a member of Second Vermont Republic spoke of how he believes that Vermont needs to secede as the United States is grown into an unsustainable empire. The US continually needs more lands and more tax revenue to maintain it. Williams also states that secession is possible and their group intends to do it peacefully.

He added that in a recent survey conducted by the Center for Rural Studies at the University of Vermont, 8% of Vermonters favor secession.