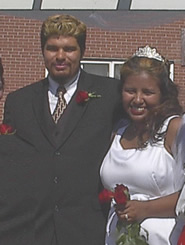 Yesterday, Heavenly and I celebrated our 4th anniversary. To celebrate we took most of the day off to spend the day together. We went out to eat at The Orchid, one of our favorite places to eat. As usual we ate more than we should have, as it’s easy to do there as there’s always a great selection and you want to try everything!

We also went to see The Davinci Code, which was better than I thought it would be. Heavenly recently read the book and thought it would “theatre worthy”. I wasn’t too sure it would be, but was willing to give it a shot. As I said before, it was better than I thought. It was very interesting story that brings up many criticisms of organized religion as well as providing a very suspensefull and entertaining story. I would think that most people would enjoy the movie… probably not strong supporters of established organized religion though.

We also spent time before the movie and after the movie visiting with family, including my aunt and cousins from Texas, whom I haven’t seen in a long time… not since Heavenly and I moved back here. It was funny, because of all my talk recently about our trip to New Hampshire, my mom now believes that Heavenly and I will be moving there soon, so she’s been telling everyone about it. One of the first things my aunt said to us was about us moving to New Hampshire. We don’t have any concrete plans to move there, but if our income were to increase, it would certainly become more attractive to move to New Hampshire. I would think that anyone considered to be working middle class (lower, middle or higher middle class), would be far better off in New Hampshire… the opportunities would be far greater and life would be much easier. My aunt in Texas who was visiting here has wanted to move back here to Vermont to be closer to family, but it would be very hard for her to take such a cut in pay and to see living expenses triple. She has considered actually moving to New Hampshire because other family here have told her about how much better it is in New Hampshire. After visiting for a while we spent some time cooling off in the pool and then came back home where we relaxed together until we fell asleep from our busy day around town. It was a great day.

Heavenly and I met in 2000, so we’ve actually been together for over 6 years total. I’m very thankfull for the time we’ve had together and even though we spend practically 23.5 hours a day together, I always feel gratefull to be with her and feel so fortunate to have found her and I love her so much. I just could not imagine life without her… she truly completes me… our nation of two. Happy Anniversary Heavenly… I love you!