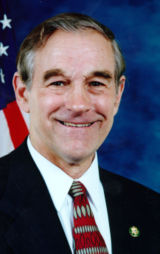 Paul has represented Texas’s 14th congressional district in the U.S. House of Representatives since 1997, and had previously served as the representative from Texas’s 22nd district in 1976 and from 1979 to 1985.

Paul previously ran for president in 1998 as a Libertarian. After losing the race, he returned to congress as Republican, against the Republican party leadership’s wishes and has continued to serve since.

Ron Paul and the Libertarian Party

Paul is for a limited governemnt, libertarian philosophy. Paul often votes against proposals for increased government spending, intiatives or taxes. His often dissents in otherwise unanimous votes have irrited many of his fellow Republicans, which has earned him the nickname “Dr. No” (an example being his dissenting vote in the No Child Left Behind Act where he was one of three Representatives voting against it.

Paul opposes nearly all government intervention in the market. He supports the abolition of the income tax, most Cabinet departments and the Federal Reserve. He also endorses defederalization of the healthcare system. Paul’s campaign slogan for 2004 was “The Taxpayers’ Best Friend!”.

You may have heard that the Honorable Congressman Ron Paul is exploring running for the Republican nomination in 2008. Congressman Paul will be the only uncompromising defender of the Constitution in the race. I can’t tell you how grateful I felt, how full of heartfelt joy, and how much enthusiasm I felt when I heard the news of his Candidacy. I am 1000% behind him! Ron Paul has stepped up to the plate because he knows what we all know: the noose is tightening, and there isn’t much time if we hope to restore to Constitutional Government.

I called Ron yesterday to tell him I am on board to do ANYTHING it takes to support his campaign. NOW is the time for the ENTIRE Freedom Movement, all Third Parties, ALL GOOD AMERICANS EVERYWHERE, from all political stripes and persuasions, to unite to overtake the weakened Republican Party. Stand firmly behind Ron Paul, and work to restore our Constitutional Republic.

Aaron Russo adds, “Please be sure visit http://www.freedomtofascism.com and sign up as a volunteer to support this effort. Also, please share this video link concerning my comments about the 9/11 fraud – ie. http://www.youtube.com/watch?v=okLrWV6ObwI. In the past 2 1/2 months we have had over 1 million views of American: Freedom To Fascism on Google Video. The movie has received the highest possible rating of 5 Stars from the viewing audience. This is an incredible testement to the American public’s appetite to learn about freedom. Please keep spreading the word of freedom by sending this email around the world. Here’s the link to the movie on Google Video:

Ode To Taxes UVM Students Save the Ice Sculpture Contest