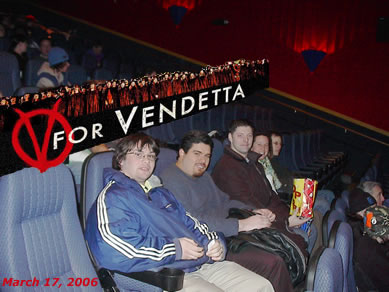 Last night, Hardy Machia, Bonnie Scott, Kevin Ryan, Jonathan Stauffer, Heavenly and I went out together to see the movie V for Vendetta, another great movie from the people who brought you The Matrix. Again, the Wachowski brothers have created a Libertarian-themed movie where a small group of people are fighting to reduce the power of an oppressive government and to open people’s eyes to it.

Brief Synopsis of film from LP.org:

“V for Vendetta is based on a graphic novel by Alan Moore that is set in England in 2020. Great Britain is under the control of a fascist government who use fear and intimidation to control its citizens. The government controls the media and clamps down on free speech through its Ministry of Objectionable Materials.

A mysterious rebel known as V, who is dubbed a terrorist by the Hitler-esque Chancellor Sulter, plots to overthrow the government. V seeks to complete 17th century saboteur Guy Fawkes’s mission to blow up Parliament, as way to spark a rebellion.

Looking at early reviews, V for Vendetta has plenty of action and thrills to keep audiences entertained, and delivers a clear libertarian message, which can be summed up in its tagline – “People should not be afraid of their governments, governments should be afraid of the people.”