How to Change the Future with Brian David Johnson – Intel Futurist 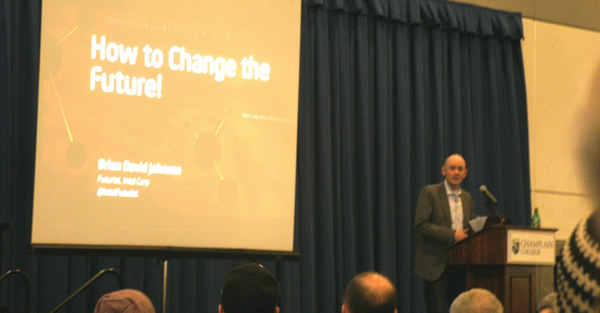 Brian David Johnson (@IntelFuturist) describes his job as Futurist at Intel as telling the company what people will be doing 10-15 years into the future so that they can plan the technology now. Below are some notes Heavenly and I took from the lecture:

Big Data can be Used for Good or Bad – what do you want to do with it?

The World is Split into Two Groups

The thing holding us back is our imagination

How Do We Change the Future?

Question: Which of Windows, Apple and Linux will win?
Answer: All of the above. Choice always wins. Always bet on choice and as much variety as possible

Question: What makes technology successful?
Answer: Are you making people’s lives better? If it solves a problem it will succeed. Any new tech should solve a problem – improve life. Blending the physical and digital.  I am a farm futurist (for a mag). Farmers are the geekiest of geeks. Best review of Google Glass from a farmer: “like a smartphone on your face” Farmers are very busy and don’t have time for anything not useful, they are the best at figuring out how to get stuff done.

Question:  Tesla cutting out middleman, thoughts?
Answer: The internet has reduced the need for many middlemen such as travel agents. They still exist, but not as much. To succeed you will need to provide more value than the direct/ internet counterparts.

Question: How to become a futurist?
Answer: His job came from the energy industry, make yourself redundant. Look at places at need to make big bets, energy, high tech, pharma, government.  His job is also called strategic forecasting.

Question: Idea translation, any tips to communicate ideas that are hard to describe?
Answer: SciFi, we relate through narratives. Put it into context or narratives. Example: person place and problem. Be able to know the smell of the future, and as bonus know what it tastes like.

Question: What kind of future imagine with resource scarcity?
Answer: We do look at resources while taking future into account, a big part of the modeling they do.

Question: AI, will it catch up with human intelligence?
Answer:  Not sold on idea that it will. Thought he would ask about terminators – as that is telling of humans, but we must take responsibility for it. The Technological Singularity is when machine intelligence surpasses human intelligence.  What kind of intelligence do we want and what do we want them to do for us? Good futures and bad ones, steps to good? To have a good future we need to have a vision – based on facts rather than fears. Have conversations with people.

Question: Economics dying? Alchemy?
Answer: Favorite economist is Paul Thomas, talks about how GDP, is flawed. Human beings are value based systems, and data driven. How you look at the market? What are you optimizing for? We should question how we look at economic metrics/values.

Question: Insight to 3d printing and 3d printing stores?
Answer:  Over time with technology we are able to do more in our own home, but there still remains a need for a stores to do some of the work for us like with desktop printing. We print stuff at home, but still use print shops for some tasks or buy greeting cards instead of printing them at home or we buy books at a bookstore instead of reading them on a computer.   Working on an open source robot that will be freely available to download and print through a 3d printer. Open source robots should be like a smart phone with legs. Freely available with the ability to download various apps into them to make them do whatever you want.

Students are unencumbered by the past, they would be the 1st gen of not knowing what it is like without internet.

It’s your responsibility to go to past generations to discuss the future.

The video below WAS NOT from this lecture but from a Keynote Presentation he did for ASTC in 2012: