Thanksgiving: a Celebration of Free Markets Over Socialism? 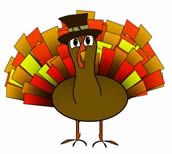 Some time ago I first heard about the article The Great Thanksgiving Hoax by Richard J. Maybury. It describes how Thanksgiving is really a celebration of free markets and private property over socialism, which had caused much famine and fraud throughout the colonies. You most likely never heard about this if you went to public schools… I know I never did. Check it out and feel free to posts your thoughts in the comments.

I think that during these tough economic times it’s more important than ever that we use holidays like Thanksgiving to reflect on how good we really have it as a society despite the doom and gloom you hear in the news. If you still have a roof over your head and food on the table it’s not that bad. It may feel worse than it really is as we are coming down from an economy that had grown so much that we took it for granted.

When I look around I see people that have so much abundance and I think that people are just not used to less, but for the media to compare what we are going through to the Depression seems absurd.

However, I think the recovery is much dependent on the people and their response to it. If the people really believe that we are going into a Depression like in the 30s, then they will make it so. However, if the people decide to have confidence in themselves, their communities and move on, we can recover much faster. The government putting all this money in the market and bailing people out will only work if people put the money to use. While I don’t agree with the government’s involvement as I believe the long-term effects will be bad for certain people, I do believe that the money could lead to a short term recovery if the banks and business community have the confidence to put it to use.

Anyways, I hope everyone has a great Thanksgiving day and remember to be thankfull for what you hav and more importantly the people you have in your life and focus less on what you may have lost or what you don’t have. You’ll feel a lot better for it.

Thoughts on the Current Economy Bill of Rights Day