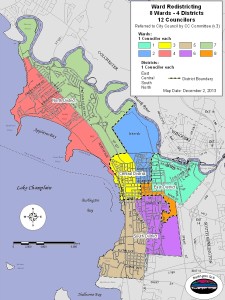 Having the 4 larger districts help solidify the incumbent’s ability to keep power as the larger the district the harder it would be a for a challenger to cover the district with signs and go door-to-door.

I can certainly understand why the mayor and existing city councilors would want this proposal, but the voting citizens should see this as a threat to diverse representation on the city council.

Vote No on Gun Control Ballot Items in Burlington Does Increasing the Minimum Wage Work?