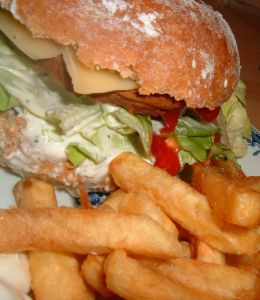 MONTPELIER – Vermont could follow in New York City’s footsteps in passing legislation that would ban restaurants and other eateries from preparing and serving food that contains trans fats.

Sen. Kevin Mullin, R-Rutland, has proposed a bill that would prohibit Vermont restaurants from using the saturated fat, which doctors say clogs arteries and greatly increases the chance of heart attacks or strokes, starting on July 1.

Mullin said he was inspired to sponsor the bill after New York City passed a law banning the use of the saturated fat late last year. He said the fat, which doctors say has no health benefits, would help reduce medical costs in the state.

“This could translate into a huge cost savings for Vermont down the road,” Mullin said Friday. “We’re looking at ways to reduce the cost of health care, and exercise and eating right, including not eating food with trans fats, are part of that.”

…another example of government trying to regulate behavior. Another area that government doesn’t have any business being involved in. Yes, they always use the excuse of health care costs… the government should get out of that too. I’m sure that there are plenty of people that would sign a waiver of any rights to government healthcare if it get the government off their back to be able to eat, drink, smoke or live as they please.

I’m sure you can expect a lot more of this kind of legislation being proposed once Catamount Health is in full effect and of course restrictions/bans will increase even more if we get full universal healthcare.

Most people know that too much of anything, including fats, are bad for you… we know that you must consume in moderation to be fully healthy, but the reality is that a lot of people don’t care. They enjoy eating, drinking, smoking in excess you cannot stop them. They will find a way one way or another and the government certainly shouldn’t take away the things that many of enjoy in moderation for the few that over-consume.

What do you think? (feel free to post your comments below)