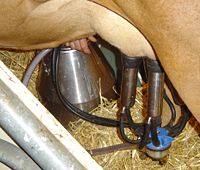 The state of Vermont has increased the limit on unpasteurized milk that farmers can sell to the public from 25 quarts to 50 quarts per day. Also, the farmers will now be allowed to advertise it. However, the milk still cannot be sold in stores, you need to buy it direct from the farmers.

Although, many of the farmers affected were hoping for the limit to be lifted altogether, this is seen as a step in the right direction.

John Clark of Applecheek Farm, one of the farmes who sells unpasteurized milk, had this to say…

From what I’ve read and heard, it appears a lot of the opposition to the sale unpasteurized milk is due to the perceived dangers of the milk. However, there are a lot of people that believe that there are many benefits to consuming unpasteurized milk. Many people can debate well for one side or the other. I will not get into the debate here as that is not the point. The point is why can’t people be allowed to choose which milk they prefer? People are freely able to purchase as much organic food or pesticide-based food? Both sides have good arguements for their case too. I guess the unpasteurized milk farmers don’t have as good a lobby as the organic crops farmers or pesticide companies do.

I don’t see why consumers cannot be allowed to buy whichever milk they prefer with limitation. You can have milk labeled or advertised as FDA Approved and non-FDA Approved or pasteurized and unpasteurized. As long as consumers are informed as to what they are buying and they choose based on their own free will, what is the problem?

Decisions like this should really be left between the people and the providers and government should get out of the way.